We have been hearing about the new Cobra Vedetta Series for months now with the promise that this new series of radar detectors from Cobra will have around a 30% improvement in sensitivity.  We finally received word that they are shipping and we should have some inventory before the end of the month.  These are unique looking units with large LCD screens: 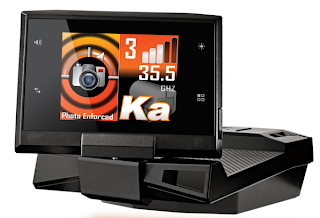 There will be three part numbers in the Vedetta Series:

The SLR-650G will be Cobra's new top of the line radar detector with integrated GPS for Camera protection as well as the normal Radar & Laser detection.  The promise of 30% performance gain is promising and something that Cobra has needed to compete with the higher performance models from Whistler, Escort & Beltronics.

We plan to immediately take one for a drive as soon as they get here and we will test the difference from their older XRS Models and the new Vedetta Models and see if there really is the promised performance gain!
Posted by Best Radar Detectors at 10:42 PM