Finding a good radar detector on a budget is a real problem.  They key word is GOOD because there are tons of radar detectors under $100 but mostly they are useless and a waste of money.  There is no way a cheap radar detector will give you adequate protection against today's radar technology.

Today enforcement uses POP Mode guns as well as I/O (Instant On) technology and unless your detector is sensitive enough to detect at great distances you will be toast.

There are a few radar detectors under $200 that are decent performers.  You can read more about them on our Best Radar Detectors Under $200 FAQ page.

The ones to look at in this price range are:

Try to stay away from any cheap detectors because they will give you a false sense of security.  If you can only afford a cheap detector I would save longer and get a better one.
Posted by Best Radar Detectors at 3:30 PM

The Escort Redline Radar Detector is Escorts most sensitive windshield mounted radar detector.  Its very sensitive and because of that there are a lot of filters setup to make it very bearable in everyday driving.  No one wants false alerts but unfortunately very cheap radar detectors in other cars next to you could set your detector off.

To combat this Escort has an RDR (Radar Detector Rejection) filter setup in the Redline which analyzes the signal and reject it and ignore if it distinguishes that its a false from a leaky radar detector.  While most drivers appreciate this feature the slight delay could cause trouble in an Instant On Situation where that half a second could mean the difference in the detection of a real instant on hit.

Instant On is where an officer is sitting there in their car looking for a selective vehicle to hit.  Their gun is off until they see a car that they want to target and then pull the trigger.  They usually would get an instant reading and then back off the trigger immediately.  This is a very quick process and is the most deadly type of shot.

The beauty of the Redline is that it is very senstive and I have seen alerts where the Redline was able to pick up alerts miles down the road.  We have some videos on our website in our Escort Redline Review where the Redline detected at 10 miles away.

The biggest flaw with the Redline is that you can not turn off the RDR Filtering if you would prefer better Raw performance.  Many enthusiasts would prefer to deal with more false alerts and better I/O protection and Escort has been listening.  They will be releasing a long awaited firmware upgrade soon that will give the Redline advanced functions normally only seen on their top of the line Beltronics Sti-R Plus model until which retails for more than double the cost of the Redline. 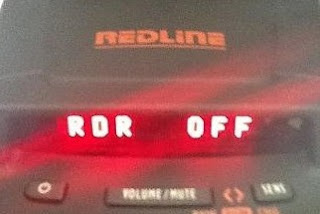 Along with the ability to turn RDR off it will also have Band Segmentation ability to remove certain frequency ranges from its scans which are not used by real police radar giving the detector a faster scan time.  That option along with the RDR option off would make this detector respond extremely quick helping is those hard to detect I/O situations.
Posted by Best Radar Detectors at 1:57 PM