As more and more people start to receive their AL Priority systems the reviews so far have been very positive.  The latest RALETC shootout of the top 3 laser jammers showed results that we were experiencing in our own testing.  To quote them "It seem that Antilaser has raised the bar.  To me I believe that Antilaser is the winner of this test. "

If you are interested in purchasing the new AL Priority you can visit the AL Priority USA website by going to http://www.alpriorityusa.com

There have been several changes recently in the high end windshield mounted radar detectors.  When you are looking for the best radar detector you also have to get ready to shell out some serious money because they sure can get expensive.

Here are our choices for the top 5 windshield mounted radar detectors.

The Escort Passport Max we rate as the best overall windshield mounted radar detector and while it had a rough start with several firmware updates under its belt many original issues have been corrected.  The biggest gripe many have with this radar detector is Escorts marketing claims which claimed it was the best radar detector with the maximum range of any other radar detector.

The Escort Max is not the longest range radar detector ever made but it is close to the performance of the Escort Redline which we will discuss later.  It is however the most sensitive gps enabled radar detector and does replace the Escort 9500ix as the leader in this category.

For city drivers the use of a radar detector can be a huge annoyance because there are many false alerts that you will encounter.  The most common false will be from automatic door openers that share the same frequency of police radar.  While these sensors are not looking for speed they are using radar to sense motion and trigger their doors to open when people are walking into the stores.

Sensitive detectors like the Escort Redline or Valentine One will constantly go off because they are so sensitive that they can many times detect these sensors several hundred feet away.   I live in NJ and I can tell you that running a non gps detector down a main city road the false alerts are almost non stop,  Its almost desensitizing that when I see a real threat I can tend to ignore it because I am used to the false alerts in the city.

The Passport Max has an auto learn function that keeps track of your driving and notes every alert it detects in its internal database.  AutoLearn technology uses the power of GPS and the exact frequency of the false alert and automatically will reject unwanted door openers and other fixed position false alerts on future passes making it extremely quiet in the city.

If you are looking for the best radar detector to use in the city and you can afford it, The passport max is the best detector for your money. 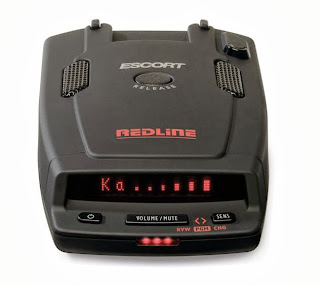 The Escort Redline is a great detector and there is no doubt about that.  If you are a highway driver this unit is awesome and it is the most sensitive windshield mounted radar detector built to date. Its built on the solid M3 antenna platform which is a dual antenna that offers the best off-axis protection available.  I have received alerts around hills and curves with no issues with the Redline.

In areas where detectors are not allowed such as Virginia, Washington DC and parts of Canada this detector has been the favorite.  Its the only detector in the Top 3 that is undetectable by police RDD's (Radar Detector Detectors) which are devices used to sniff out vehicles using radar detectors in banned areas,    If you live in one of these areas and want a radar detector this is the detector to get hands down.

I have seen many videos from customers of ours (See Escort Redline Detailed Review) on our website for videos that will show the Escort Redline detecting threats as far away as 10 miles.  This is a crazy sensitive detector and for Highway use this detector is simply the best.

The latest firmware update on the Escort Redline with enhanced RDR/BS options enables you to now have advanced Band Segmentation ability which was once only available on the much higher priced custom installed Beltronics Sti-R Plus. BS (Band Segmentation) allows users to select certain frequency ranges within the KA band to turn on or off. Removing certain bands from the scan that you know are not used in real police radar allows the Redline to scan the KA Band much faster.

RDR (Radar Detector Rejection) option with the new Expert Firmware was not an option you could turn off in previous editions. This option allows the detectors to eliminate False alerts caused from nearby radar detectors in other vehicles. While this works great to eliminate false alerts it causes the detector to pause (Only for Miliseconds) while it determines if the alert is a false or a real threat. The problem is I/O and POP Radar are very fast and having this option on could cause the Redline to not alert to one of these real threats.

Using RDR & BS at the same time almost turbo charges the response time of the Redline (See Escort RDR/BS Video) while not adding many additional false alerts. Since you eliminate segments of the non real police frequencies you can eliminate many of these false alerts and you can use the RDR Off function to dramatically increase the response time of the detector. These are not features the average user should play with without guidance of knowing what is used in their area. We can help with setting up your Redline properly in your area.

So to sum it up if you are a highway driver or live in an area where radar detectors are banned the Escort Redline is the best highway performing radar detector.

While we do not sell the Valentine 1 there could not be a top 3 without it.  For many years the Valentine was the leader of the industry and was considered by enthusiasts the best radar detector around.  Times have changed and Valentine has let the Redline pass it as the most sensitive detector.

The Valentine 1 is a highway radar detector like the Escort Redline.  It does not have the stealth capability that the Redline so if you are in a Virginia, Washington DC or parts of Canada this is not the detector for you.

What is does have that makes it special is two separate antenna's (One in the Front and one in the Rear) so the valentine can help pin point the direction where the signal is stronger to give you an idea where the signal is coming from.
Posted by Best Radar Detectors at 6:48 AM No comments: