Escort has recently released an update to their 8500x50 radar detector called the Escort 8500x50 Black. Besides the immediately noticeable black colored case the Escort 8500x50 Black has a new lens which also gives the new version some performance increase. Escort has claimed a 40% performance increase but they do not specify where they get this figure from.

In testing the new Escort 8500x50 Black there is some increase over the original 8500x50 but its definately not 40% better.  I think Escort is comparing it to average competitors in the $100 to $200 price range and not directly saying its 40% better than the original model.  Overall they did not increase the price with this new release so if buying a new detector definately get the black over the older model. 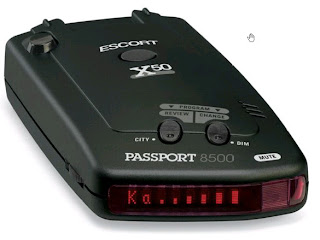 The Escort 8500x50 has always been a solid performer and one of the best radar detectors under $300.  I am courious if they will revise the Beltronics RX65 with the new lens as well.  Right now we still like the Beltronics RX65 as the top performer in the price range since it also offers voice alerts and KU Band support at the same price.
Posted by Best Radar Detectors at 2:53 PM